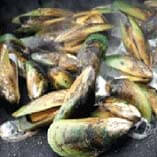 Archaeologists studying the Maori tribes of New Zealand have uncovered centuries-old mounds of green-lipped mussel shells in the ancient trash heaps of the earliest inhabitants of New Zealand. Known among marine biologists as perna Canaliculus, the green-lipped mussel has been the subject of much study indicating they were a staple in the diet of the coastal Maori tribes for centuries.

For The Maori, the green-lipped mussel was a nutritious, protein-rich food source. They cooked them, dried them, or simply ate them raw, not ever knowing that they were actually laying the groundwork for decades of modern clinical research.

Anthropologists studying Maori culture discovered that these earliest New Zealanders endured some very harsh conditions, however, exhibited robust health with no indication they suffered from debilitating physical ailments, limited mobility, or pain. In fact, the term “joint pain” doesn’t even exist in the Maori language.

Compared to other tribes of the time, this aspect of Maori health was unique. So much so that it got the attention of NASA. In the early 1970s, NASA scientists were searching the world for natural ingredients that might help in the battle against the disease and stumbled across the unique aspect of the Maori diet – the green-lipped mussel.

Preliminary research demonstrated that the green-lipped mussel appeared to have impressive anti-inflammatory properties – far stronger than those of other fish and shellfish. This fostered the basis for the hypothesis that the Maori were unique to other similar cultures of the time – in that they didn’t exhibit physical limitations due to inflammatory conditions – because of their unique diet of green-lipped mussels. What followed was decades of research that uncovered a laundry list of joint-supporting nutrients in raw Green Lipped Mussels, including:

It was only a matter of time before the natural health community took notice of the studies being published in medical journals across the globe. They couldn’t ignore the amazing

anti-inflammatory and pain-relieving boon to joint health from extracts made from the green-lipped mussel. Inevitably, the industry created preparations from the extract aimed at consumers suffering from joint conditions.

All Natural, Eco-Friendly and Specially Made

Even though green-lipped mussels grow wild in the coastal estuaries of New Zealand, to be harvested commercially for consumer use, the New Zealand Minister of Fisheries mandates those mussels be farmed responsibly, with special attention paid to the sustainability of both the mussel and its environment.

Growing and harvesting green-lipped mussels under the control of strict regulation is only part of the process that brings their natural healing power to consumers with painful swollen joints. Extracting and concentrating the many potent nutrients locked in the green-lipped mussel requires a process tailored to the unique and fragile qualities of the mussel. Because the lipids, fatty acids, and some antioxidants break down under heat, the healing power of the mussel extract would be lost under the typical marine products’ processing using heat (molecular distillation); so, a cold process had to be found.

Super-critical fluid extraction (SFE) was developed in the mid-1980s as an alternative method to conventional, high-heat, extraction of fatty acids. It is now the standard method for the extraction, fractionation, refinement and deodorization of lipids and essential oils from a variety of sources. Carbon dioxide is chosen as the supercritical fluid used in the extraction of green-lipped mussel oil because it’s environmentally friendly, non-toxic, non-flammable, non-polluting, leaves no toxic residues in the extract and, because it has a very low “critical temperature,” eliminates the risk of thermal degradation of the fatty acids. SFE with carbon dioxide might sound unduly scientific, if not foreboding, but it is really a very friendly, albeit complicated, process; it’s the same process used to decaffeinate coffee beans.

In order to create an effective, stable, therapeutic extract from green-lipped mussel, the manufacturer has no choice but to employ SFE with carbon dioxide. And, as you can imagine, the process isn’t cheap. But, it is the only process that produces “PCSO-524®”, a unique, stabilized, green-lipped mussel extract – the same extract that has been the subject of all those published university studies.

OmegaXL is a leading joint pain supplement sold in the world that contains the patented stabilized New Zealand green-mussel extract, PCSO-524®. Numerous clinical studies have been published demonstrating PCSO-524’s effectiveness in relieving joint pain and inflammation. Just two small, easy to swallow OmegaXL gel caps a day provide potent joint support backed up by more clinical research than most other nutraceuticals on the market – from the same source the Maori have enjoyed for centuries. OmegaXL is an exhaustively studied modern version of an ancient miracle.