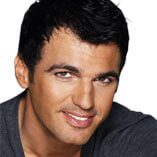 Tony Dovolani now adds “Global Brand Ambassador for OmegaXL” to his professional body of work that includes co-hosting segments on EXTRA and corresponding for Good Morning America. He also played Latin bad boy competitor, Slick Willy, in the hit film Shall We Dance. He was a dance instructor on the film and had the privilege of coaching and working with Richard Gere, Jennifer Lopez and Stanley Tucci. However, Tony is perhaps best known for his 14 year run on ABC’s hit series, Dancing With The Stars, which he joined in season two.

A Pro- World Champion Ballroom Dancer- ‘Dance With Me’ Dance Studios Co-Owner and veteran of 14 seasons on Dancing With The Stars, Tony’s dance card is filled; on any given day he’s dancing for a live audience. One thing that’s not on his schedule is joint pain.  Tony has found incredible relief from joint pain with OmegaXL and is eager to share the secret that helps him dance up a storm free from joint pain.

Tony reveals on the show, Pain Relief with OmegaXL, that he relies on all-natural OmegaXL to get through the inevitable aches and pains that come with dancing. Tony has become one of the thousands of OmegaXL users who have told their life changing success stories about living with joint pain in OmegaXL’s current talk show-style TV show. The show speaks to every audience, proving that no matter who you are or what you do – pain disrupts busy lives.

“As a professional dancer aches and pains come with the job,” states Tony.  “Rather than live with them, I started taking OmegaXL and it changed my life. I am now living healthier, happier and pain free as I continue to dance and enjoy everyday activities with my family and friends.”

Tony has been dancing since he was three years of age. Now, at 38, it would be impossible to imagine he wouldn’t be experiencing more than a few aches and pains. According to Tony, OmegaXL not only helps him dance at the level he needs to perform, but he also credits his famous good mood to the fact that he can perform without pain.

“I’m known as the nice guy of Dancing with the Stars, but there were a couple of seasons where I wasn’t so nice because I was in pain,” says Tony.  “When people are in pain, they snap quicker. They lose their patience. Pain really changes who you are, although we put on a smile on Dancing with the Stars we, we smile through the pain.  It got to the point where I even though I might not be able to do another season. But now, I say I can do as many seasons as they want because I’m ready for it! I can only imagine how many people limit themselves because they are living in pain. OmegaXL is a product that helps you live a healthy life and that’s something that I want to share with as many people as possible.”

Tony Dovolani is back for season 15 of Dancing With The Stars paired with former Dallas Cowboys cheerleader Melissa Rycroft.

OmegaXL®, with PCSO-524®, is marketed exclusively by Great Health Works, a company dedicated to your good health.  Over Half a Billion OmegaXL gel caps have been sold to satisfied customers who enthusiastically confirm the incredible inflammation fighting and long term joint pain managing effect they experienced with this unique, all-natural, supplement. Great Health Works cares about you.  Their friendly representatives call you, not once, but twice in the weeks after you receive your order to check in and make sure you are satisfied, happy and using OmegaXL correctly.  They even offer Auto-Ship, the company’s program that automatically insures you never run out of OmegaXL month after month.  OmegaXL