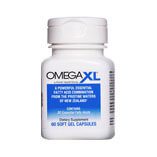 According to a recent study published in the journal Rheumatologia, the official journal of the Institute of Rheumatology and the Polish Rheumatological Society, the key ingredient in Omega XL, PCSO-524®, an all natural, Omega-3 marine oil extract containing DHA and EPA from the New Zealand green-lipped mussel, may provide more benefits for joint mobility and pain compared to standard fish oil.

In a double blind study design, 50 patients older than 50 years of age from the Rheumatology Clinic at the Wroclaw Medical University Hospital with a diagnosed history of osteoarthritis of the knee and/or the hip participated in the study.  They were randomly administered either a supplement that contained either PCSO-524® or standard fish oil capsules.

The research findings demonstrated, in four, eight and 12 week intervals, that patients who were administered PCSO-524® showed a statistically significant improvement of both their joint pain conditions and improved quality of their daily lives. Patients administered standard fish oil showed significantly less improvement and a greater level of physical discomfort caused by the fish oil during the study.

Researchers stated that, “given the large dosages needed and long duration required for fish oil, combined with the potential side effects, omega-3 supplements containing PCSO-524® could be considered as a safer and faster acting first-line medication for patients who suffer from pain due to inflammation.”