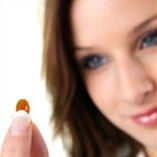 Can fish oil relieve pain? Fish oil actually can help relieve certain kinds of pain. Considering the number of people in America who are suffering from some form of pain, if fish oil can have a beneficial effect, it would help a great many people. According to the American Academy of Pain Medicine (AAPM), an estimated 76 million Americans suffer from some form of pain each year. This means that, in America, those suffering from pain out number those afflicted with heart disease, diabetes and cancer combined.

There are three types of pain humans suffer depending on the stimuli that excite specific pain receptors throughout the body. Depending on the condition one, two or all three receptor types can be stimulated, however, in most cases pain is detected via a specific stimuli; either thermal, mechanical or chemical.

The former two are a direct result of acute trauma either a burn, or in the case of mechanical stimuli, the nervous system is reacting to the acute phase of an injury such as broken bones, cuts, abrasions, blunt force trauma, etc. This type of pain, while potentially intense and unbearable, subsides once the acute phase of the injury that causes it is stabilized and healed. The later form of pain, chemical, is the focus of this discussion.

This is potentially beneficial because omega-3 fish oil contains the essential omega-3 fats EPA and DHA. These are believed to compete with the inflammatory chemicals produced in the presence of omega-6 fats for binding sites in the cell membrane and therefore able to modulate the pain stimulus to the brain in much the same way some non-steroidal anti-inflammatory drugs (NSAIDs) do minus the adverse effects. The end result is less production of pro-inflammatory chemicals and therefore less pain.

While omega 3 fatty acids are relatively safe to consume as compared to NSAIDs, and they can benefit certain inflammatory conditions that cause pain, there is such a thing as going overboard. The FDA recommends a daily intake of three grams of fish oil with no more than two grams coming from a supplement. Try OMEGA XL Today!