What is Joint Pain 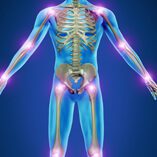 Joint pain SOUNDS like a simple condition, but it’s actually complex when you get down to the nitty-gritty of the physiology involved. In anatomy, the term “joint” refers to the physical point of connection between two bones. For example, the knee joint refers to the point of connection between the femur, or thigh bone, and the tibia, or thicker of the two shin bones. Joints also contain a variety of fibrous connective tissue such as ligaments, which connect the bones together and tendons which connect muscle to bone and cartilage, which covers the ends of bones and provides some cushioning. The first joints that come to mind are known as “synovial joints”; they are surrounded by a fibrous tissue or sac called the joint capsule. This capsule surrounds the joint and is filled with a fluid called synovial fluid that lubricates the tissues and spaces within this capsule. As you can see, although is just the articulation of two bones, you ALSO have ligaments, tendons, sacs and membranes involved. With that said, joint PAIN can therefore be caused by injury affecting any of the ligaments, bursae (those previously mentioned fluid-filled sacs), or tendons surrounding the joint in addition to injuries to the bones themselves. Pain is also a feature of joint inflammation and infection, and can be a feature of tumors of the joint.